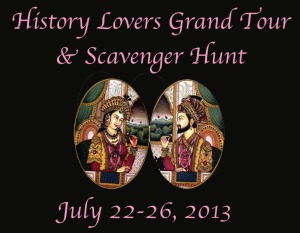 If you were a bookish sort of girl during the Regency period, where would you go on an outing with a gentleman? Assuming you found a gentleman who appreciated a lady with a sharp mind, and a chaperone willing to accompany you, you might make a trip to the British Museum.

In 1675 Ralph Montagu (later the 1st Duke of Montagu) bought a piece of property on what was then the northern outskirts of London, and built himself a grand house. When it burned down a few years later he built an even bigger one, more palace than house. Upon the 1st Duke’s death, his son inherited the property, but had no son to follow him. The 2nd Duke’s two daughters inherited the unentailed property when he died, including Montagu House in London. Since both were married with homes of their own neither sister actually lived in the place, and it began to fall into disrepair.

Enter the trustees of the newly-founded British Museum, who were looking for a building suitable for housing antiquities and other collections. They bought Montagu House in 1754 for 10,000 pounds and hired a Mr. Bramley as gardener. Within a year the lawns, gravel walks, and kitchen gardens were restored to their former glory. By 1757, the gardens were open to the public a full two years before the building itself was ready. By 1800, 600 different species of plants had been established on the grounds.

What would you have seen inside? A big attraction was the Parthenon Sculptures brought to England by Thomas Bruce, 7th Earl of Elgin (popularly known as the Elgin Marbles). On display since 1817, the sculptures were originally part of the Parthenon in Greece, decorating the building as it went from Athenian temple to Catholic church to Muslim mosque. When Lord Elgin took up his post as British Ambassador to the Ottoman Empire, the Parthenon was a ruin. As a way of preserving what was left, he removed statues and friezes from the Parthenon and sent them home to London. This jump-started a craze in England (and the rest of Europe) for all things Greek.

Have you read a Regency novel where a character dressed as a Greek goddess for a masquerade? Have you heard gowns or hairstyles described as Grecian? The Elgin marbles were a large part of this cultural phenomenon. And they are still on display at the British Museum to this day.

And now for the giveaways!

Leaving a comment on this post will enter you in my individual giveaway: a 6-pack of credits at Discover a New Love. Each e-book is 1 credit, and they often have books available before their public release. This giveaway is open to anyone in any country, but comments must be left by 11:59 pm EST on Friday, July 26, 2013 to be entered.

We’re also having a Hop-wide scavenger hunt! Just visit each of the websites participating in the Grand Tour, and enter your answers to their scavenger hunt questions here. The entrant with the most correct answers will receive a $50 gift certificate to the book retailer of her choice. This contest is also open internationally, and entries must be submitted by July 26, 2013.

Scavenger Hunt question: What year did the Elgin Marbles go on display at the British Museum?